So I really like my Palomino Blackwing 602s. I actually got to the last one in the package which is saying alot because although I use pencils alot I love to have many different kinds of pencils laying around. Well I ordered my second box of them and they just arrived in the mail today. I ordered the pink replacement erasers of course and as I went through the box replacing the black erasers with pink erasers I noticed a minor change to the design of the Palomino Blackwing 602.

The only annoyance I had with the Palomino Blackwing 602s that came out last year (as well as with the Palomino Blackwing) is something that I did not really stumble into until I had used several of the pencils down to the nubs, and used the erasers more than usual. The little clip that holds the eraser in did not have any sort of grip the way the Original Eberhard Faber Blackwing 602 did. When you tried to extend the eraser so that more of it was usable it would just slide back into the ferrule. This in my opinion is the reason for the unique ferrule in the first place so it was an annoyance but only if you actually used the eraser down that far. I of course had several extra erasers and was able to avoid being frustrated by simply replacing the worn out eraser.

Pencils.com has come through by tweaking this issue and saying nothing about it. I love it when a company makes improvements to their products! 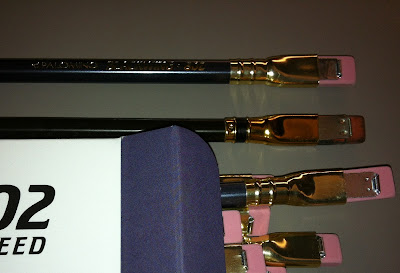 The dimples make it much easier to adjust the eraser so that it sticks out at any length you need. This post is just a heartfelt thank you to the makers of Palomino pencils for making an improvement to the product.
Posted by Matthew at 9:33 AM 1 comment:

Today I am reviewing a pencil that has made its way to the head of the line. It is a specialty pencil. I have been doing so much editing work lately at my job that I have found these things to be a wonderful desk companion. It is a pencil that is meant to be sharpened at both ends. 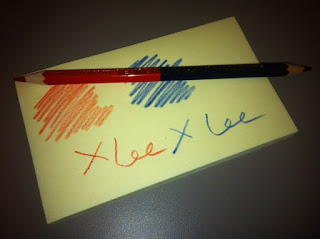 Normally the idea of sharpening both ends of a pencil just seems plain wrong to me. I have had one too many pencils break my skin when I put my hand in my pocket for that to be practical. A couple of pencil caps from General pencil solve that issue for me.

This pencil writes smooth without the waxy feel of the typical colored pencil. The lead is surprisingly strong and long lasting. I do find myself using the red more than the blue but it is nice being able to write feedback and correct grammar all with the same pencil. Highly recommended. Cost about a buck a piece and they are available online and at local art stores.

Graphite is key to green technology

I was reading some financial news and discovered something I was not aware of regarding the good stuff at the heart of my beloved pencils. Did you know that a key component of lithium ion batteries as well as fuel cell technology is graphite? The demand for graphite globally is expected to grow at at alarming rate. Amazing stuff.
Posted by Matthew at 12:45 PM 2 comments: