I started out with 3 pristine examples of the Palomino Blackwing replacement erasers. One of each color respectively.


I began by setting up a test page on Stenographer's paper. The first test I ran for each eraser was on the heavily shaded block. The shaded block was created with a Palomino Blackwing 602. Each eraser first did an up-down (on left) then an up-down twice (in the middle) followed by an up-down three times (on right).


Then each eraser was challenged by erasing completely the words Palomino Blackwing. This did not require a set amount of passes, I simply erased it as completely as I could. The erasers were mounted in a new 602.

My reasoning behind the two separate tests was to see which eraser performed the best with the fewest swipes and which was the best at getting the paper the cleanest overall regardless of the number of passes.

The black eraser was the best performer in the quick use test. Three passes left the paper very clean.

The white and pink erasers seemed comparable to each other. The white eraser seemed more prone to smearing than either sibling.


The pink eraser did not do as well as the white in this test yet it did not have the smearing issue that the white one did.

Under a magnifying glass the black and pink erasers appear to have a high amount of what I believe to be diatomaceous earth. (Can anybody confirm this for me?) If the white has any of this it is not visible. The white eraser is very similar to the Pentel high polymer erasers. 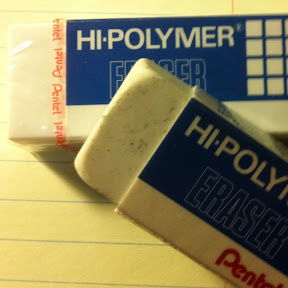 Hard to see but this picture does show the semi-reflective specks that I found in the pink and black erasers.


It is hard to be a fair judge when you clearly have a favorite. I am happy to say that the pink eraser seemed to be the best performer in the second test. It cleaned up the paper very well in comparison to the others.

The final verdict? I think the black and pink erasers are winners each with their respective strength, the white eraser is still a nice eraser it just didn't perform as well as the other two. 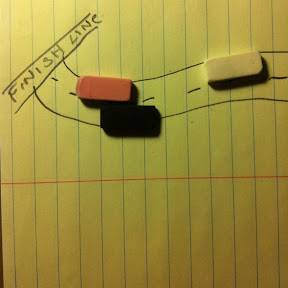 I know that pencils.com would be glad to send you a pack of each color replacement eraser if you'd like to hold your own grand prix. If you decide to have such an event let me know how it goes and watch out for Amy!
Posted by Matthew at 6:35 PM