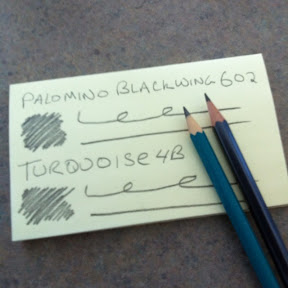 So begins part 2 of this pencil review. You can see in the image above that I have run my normal test comparison with the Turquoise 4B. Darkness on the Palomino Blackwing 602 pencil is nearly identical in tone to my test pencil. For lead performance excels in retaining it's point. In the next photo you can see that the tip is not nearly as worn on the pencil on the right (the PBW) as on the pencil on the left (the Turquoise 4B) I know it is not a great photo but in somewhat illustrates the point (no pun) I am trying to make. Each of the pencils was tested with a brand new point on them that was created by a Helix Metal sharpener. I used this pencil for some sketching last night and was very impressed with how easily it works the gradients. I can ease up on it and really get a smooth lighter line or get a nearly black grey when I really work it. 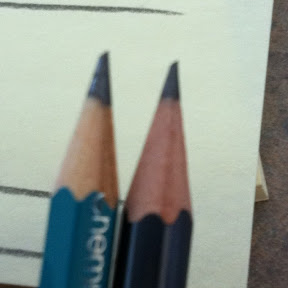 The one gripe I have about this pencil and rest assured this is a small gripe is with the gold-foil lettering. I really want this to be the very best pencil I have ever used. I want this pencil to be the pencil that replaces all others for me (ok that would be a bit drastic) I want this to be the pencil that I buy everybody I know for Christmas... but it isn't. The gold lettering wipes off so easily I startled myself with a single rub along the side of the pencil almost the entire logo came off leaving gold flecks all over my finger. I noticed that the stamping on the original Eberhard Faber 602 was much deeper into the pencil and that seems to form a valley of protection for the lettering. I know it is a small gripe, not a big deal. But I am the sort of guy who blogs about pencils and I cannot ignore this fault. Some may see it as a positive attribute. 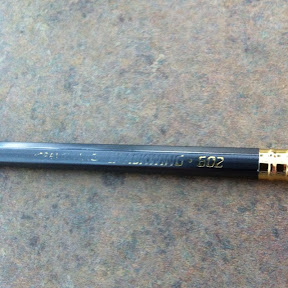 The slogan on the back has thus far held up better but I am convinced that one swipe of the thumb would remove it from the pencil entirely as well. This always bothered me with my Tombow's and Faber Castell 9000's when the markings wipe off with my finger. I was thinking it is actually kind of funny that the markings wipe off with "half the pressure and twice the speed" of other markings from CalCedar. I would be curious to know if it has anything to do with how glossy the paint is. 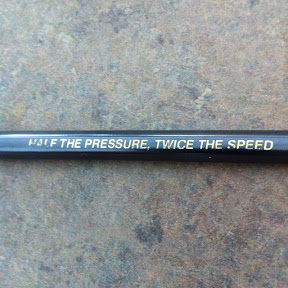 The wood portion of the pencil is nearly perfect. The lead is absolutely centered, the grain is smooth and uniform in color and the further I got down sharpening this pencil I find that the cedar is much more aromatic than I experienced the first few times sharpening it. 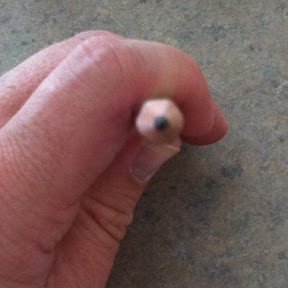 This review covers the replacement pink eraser. Yes I am glad I bought the upgraded pink erasers of course that added about 30 cents to the per pencil price but I can live with that. I have decided that at a later data I will write a comparison of all 3 eraser colors, white, black and pink. I will have an eraser showdown. I am hearing from other pencil folks that the black eraser out performs the pink or white. 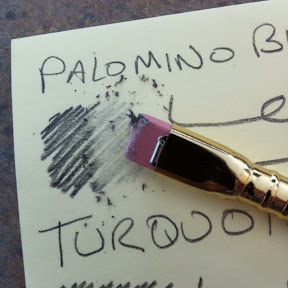 I am not disappointed at all with the pink eraser's performance, it is about what I expected. Like I said I will give the eraser a separate workup against it's siblings in a later post. 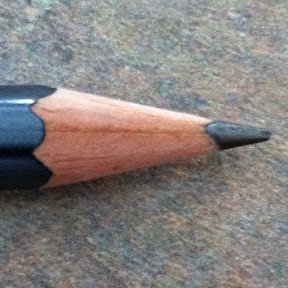 The wood has a really nice smooth grain. The shavings are more likely to stay intact that fall apart. I am saving them for the compost bin. 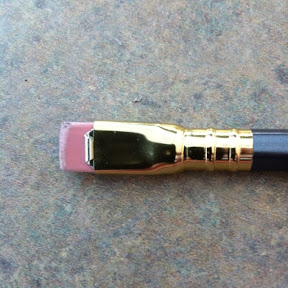 Here are some more photos of the ferrule that is identical to the original Palomino Blackwing with the minor exception that this one is slightly crooked and the gold lettering does not line up with the ferrule flats. I am not bothered one way or the other I just noticed that the original is lined up and always perfectly straight. 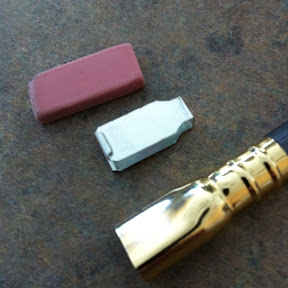 If I were to use some sort of a rating system, I'd give this a very high score. Like a 95% or something like that. The crooked ferrule and the gold lettering are the only marks against this pencil. It is a pleasure to write and draw with and it is a very good looking pencil.